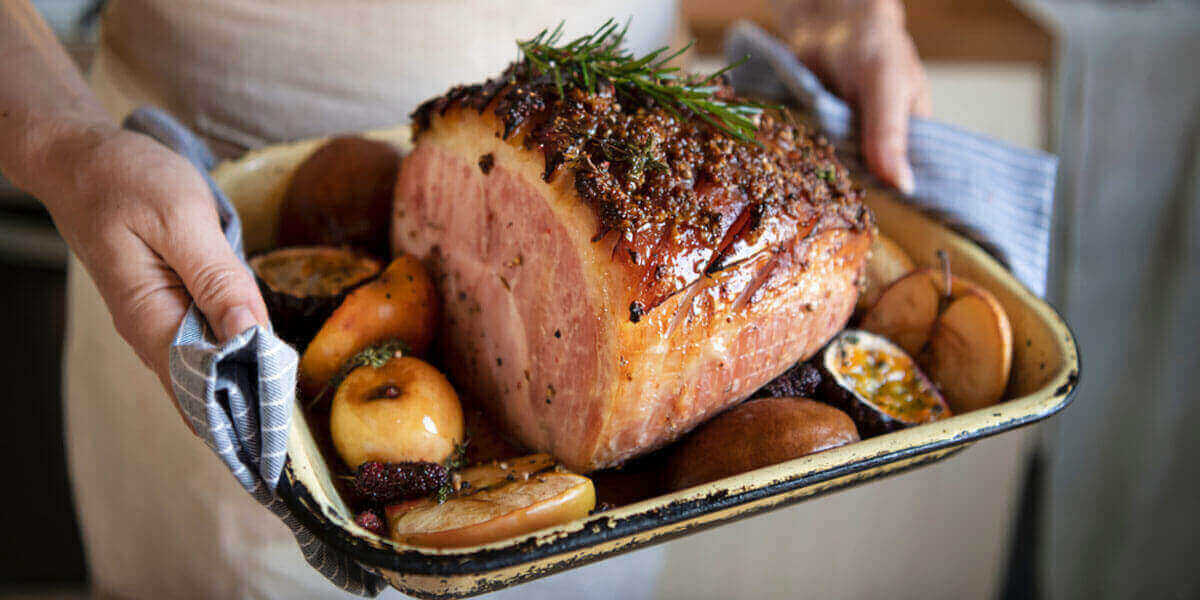 Only yesterday you bought some tasty ham varieties for your dinner party. Fresh and delicious, everyone loved the canapés you made with it. However, only 10 people turned up— instead of 15— and you had lots of ham leftovers. So you are probably wondering how long it lasts and, understandably, “How do I store ham to keep it safe and flavorful?”

Ham is one of the most beloved pantry staples all over the world. Lots of people would not even dream of going without it! Pizza, sandwiches, omelets, quiche, baked goods— all these delicious dishes and snacks are made much better with some tasty ham. Over the years, I have hosted lots of dinner parties and holiday dinners.

I am of the opinion that you can never go wrong with some ham in your entrees or main course. Its storage can seem difficult to figure out at first. I compiled a full report of my experiences storing leftover ham. Here is all you need to know to be successful!

What Is Ham, Exactly?

Ham is such a normal food item in our pantry and kitchen that we often do not pause to give some thought to where it came from and how. If you are the least bit curious or concerned about your health and well-being, you must care about this tasty meat’s origin and process. So what is it? Essentially, ham is meat. Pork, to be exact.

The one you have in your pantry— at least, if you bought one of the more traditional and natural versions— is pork that used to be part of a leg cut, in which case it might also include the leg bone. This meat can also be artificially created. It is not raw meat, though! It has been cooked or cured using wet or dry techniques. This both means that it is processed meat and that it keeps for longer than if it were raw.

Interesting fact: Because of the ease of its curing process, ham is mentioned in ancient writings from cultures as far apart as Rome and the China of the Antiquity.

In the Antiquity, people were quite limited in the types of ham that they could get and how they could store it. Nowadays, however, we have a huge variety of options— so wide, in fact, that we might not know what product to pick! These are the most common ham types:

All these ham varieties can be found at the grocery store. You can find them whole, sliced, diced, or even in a can!

Nutritional Profile of Your Favorite Ham

This meat has both advantages and disadvantages in the realm of nutrition. On the good side:

On the other hand, there are also some drawbacks to eating this meat:

If you are concerned about these risks, you can either choose to eat fresh ham or buy processed products that state— on the labels— that they are low in sodium and/or nitrite and nitrate preservatives.

What Types of Ham Can You Freeze?

Now that you have gone to the grocery store and have picked your favorite pork product to take home, you need to start thinking about storage. One of the most common and accessible options is the freezer. With the ham type guide you have already read, you know how to tell different types apart as well as how they are produced.

However, it can be a little confusing when you just learn it. Luckily, there is little you cannot freeze, these days. Almost all ham can be frozen! You can freeze both a whole ham and its diced version. Slices can also be frozen, though— because of their frailty— it is not always advisable (if you already know you are going to freeze them, try to choose slices that are thicker).

The only type of ham that cannot be frozen is canned ham. This is both because of the packaging and because of the artificial products involved in the canning process. However, after you take the meat out of the can, you can freeze it normally!

Recap: all ham can be frozen except for canned ham. Be careful with the slices.

How to Pack Ham for Storage

Packing food items for storage can be quite an inconvenient hassle. Choosing if and when to use aluminum foil, plastic or saran wrap, different types and materials of containers. No wonder you want to know how to pack something as precious as ham for storage. It is not hard, though! You will find the process much easier than packing many other food items. Follow these steps!

I know, I know: it sounds complicated. However, when you get some practice, it will become second nature to you. You can always bookmark this page for guidance on ham packing and storage.

How Long Is Ham Good for?

Now that you have a complete guide on how to pack your ham to achieve successful storage, it is time to get to the storage time periods. It is important that you follow this guide because not doing so can mean that your ham— like any meat— goes bad and gives you food poisoning

First of all: you do not want to leave ham on the counter for longer than two hours— it does not matter what type. Treat it just like you would any other meat.

Follow the wrapping instructions above and place the ham in an airtight container. How long would it last in the fridge? It will keep for up to four days.

How Long Can You Freeze Ham Before It Goes Bad?

If you did everything right and your freezer’s temperature is stable, this meat will last indefinitely. However, just like any other meat, it will only keep its flavor, texture, and quality for up to 4 months. If this stored meat shows any signs of spoilage (odd, slimy texture or a sour smell), do not eat it! Throw it away immediately.

Now that you know how to pack and store this meat correctly, you will enjoy lots of tasty and safe dishes whenever you want! How long does ham last? You have all the answers!