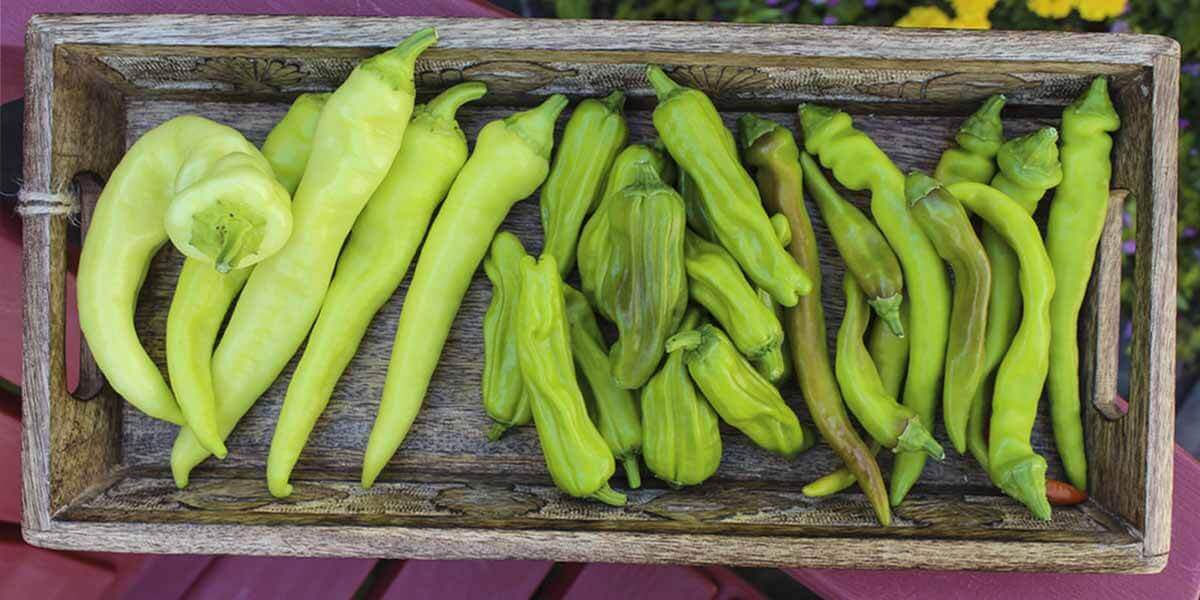 If you know enough about peppers to enquire about pepperoncini vs banana pepper, you must be a spice enthusiast like me! There are some plant products that are necessary for almost every dish and peppers are one of them. Salads, sandwiches, pizzas, and more: pepper makes dishes tastier for centuries. It contains Capsaicin which makes them hot. Every country’s cuisine uses it in different ways.

The doppelgangers in question, banana pepper and pepperoncini are very popular among chilis. Their texture, taste, and freshness make them a prior choice. They add a fresh and sometimes bitter taste to the dishes and always make them better. You can even just eat them out of a jar, like a snack. A healthy snack! They speed metabolism and help us lose weight.

The antioxidants help prevent a variety of diseases like Alzheimer’s, cancer, and more. They may look identical but actually it is easy to tell them apart. For example, banana peppers are sweeter than pepperoncini’s. Pepperoncinis are bulbous and banana peppers are pointy. Once you pay attention, you can tell the difference between these. How do restaurants use these two?

Well… Olive Garden uses pepperoncini for their salad. Papa John’s offers us both for pizza toppings. Some restaurants serve pickled pepperoncini with their main dish. It is pretty popular, indeed. Join me in this article to learn their definitions, their differences, and how to use them. Which one is which? Which one is better? Banana pepper vs. pepperoncini. Let the chili wars begin!

What Is Banana Pepper

This bright yellow medium-sized pepper changes its color through its lifespan. It becomes green, red, and orange as time passes. It has smooth skin and a pointy edge. Also it can be stuffed, fried, jellied, or pickled. You can eat it raw, too. Anyhow, this gives a mild, sweet and a bit bitter taste. It is not that bitter, you almost can’t feel it, but it still is a bit.

Banana pepper has a sweet and fresh taste. It is one of the most preferred additions for the recipes. It is rich in fiber, calcium, folate, potassium, protein, vitamin C and A. This waxy-looking pepper does not have fat or high-calorie content. If you are dieting, this pepper can be one of your choices.

Most chili peppers originated in America but peppers such as banana peppers are spread across the world. They are now an essential part of our dishes. Growing banana peppers is a piece of cake! You can even grow them in your little apartment balcony.

Pepperoncini is a sweet and mild pepper originating in Greece and Italy, and eventually spread throughout the world. This chili is not that hot, it has a medium heat level. It is a greenish-yellow at first but ripens to red. The skin is thin and wrinkled. Its edge is bulbous. You can tell pepperoncini and banana pepper apart by their edges.

It is very popular in Italian cuisine. It is served in many restaurants along with the main dish. Pepperoncini is low in carbs. 30 g of pepperoncini is 8 calories. So, it is also a good option to add to your diet. It is also rich in vitamins, fiber, and minerals.

Differences Between Banana Pepper and Pepperoncini

Banana pepper and pepperoncini are cultivars of the same species called Capsicum annuum. That’s why their nutritional values are nearly the same. But when we put that aside, these two chilis differ in many ways. Although they may seem similar to each other, there are some features we can use to tell apart pepperoncini vs banana pepper. Let’s take a look!

Heat: While banana pepper has a heat level between 0 to 500 SHU, pepperoncini has a heat level ranging from 100 to 500 SHU. If we compare it to jalapeno, we cannot define either of them as ‘hot’. But they are a bit hot when compared to other peppers.

Flavor: These both have similar flavors. It is hard to tell them apart by taste if you do not pay attention. However, I find banana peppers sweeter than pepperoncinis. They are juicier and slightly bitter. Banana peppers are tangy and sweet, pepperoncinis are also sweet but they are hotter than banana peppers.

Look: Look at the pointy edge of banana pepper! It is actually easy to recognize, right? While banana peppers have pointed edges like bananas (hence the name!), pepperoncinis have a rounder look.

Banana peppers turn into yellow, orange, or red as they ripen. But pepperoncinis turn into a deep red color which makes them look hotter.

Skin Types: Although these two are roughly the same size, they differ in skin types. Banana peppers have smooth and straight skin. But pepperoncini’s skin is wrinkly.

Banana peppers are often cut in rings because they look so cute that way, don’t you think the same? It gives a fancy look to dishes. On the other side, pepperoncini’s are often served as a whole. We can see them like that in the salads at Olive Garden.

How to Use and Where to Find Them

Pepperoncini: This mild, sweet, but the bitter taste makes everything taste better. You can use it in your sauces, soups, salads, sandwiches, and many more. I personally like eating them raw for their fresh and juicy taste. Like I said before, pickled pepperoncinis are very common. Especially Italians use it often.

It is a tangy low-calorie snack with a bit of heat that you can enjoy straight from the jar. You can find pepperoncini’s in local markets. They are usually on the same shelf with other pickles. If you want fresh ones, it may be harder to find them since they do not commonly sell it at markets.

But you can visit a farmer’s market to learn if they are growing any. And if you like getting your hands a little dirty… Well, you can grow! I have a friend who grows pepperoncini’s in her small apartment balcony. Why can’t you do it as well? Make your own home garden and start to grow some!

Banana Pepper: I remember some days, my father would come home with a couple of bags of banana peppers when they were on sale. We would pickle them and eat them all year round. Unlike others, banana peppers retain their color after pickling. Banana peppers are also used for sauces, such as salsa. For a modern spin, you can use banana peppers as toppings for your pizza!

Cut them in rings, this gives them a fancy look. The fresh and mildly hot taste of banana pepper makes it more delicious. It cuts through the fattiness of a pizza. These peppers pair well with sandwiches and salads, too. The sweet and subtle heat complements every salad of your choice. I suggest you use banana peppers especially with creamy dressings for a rich flavor contrast.

Here comes my favorite: stuffing! Banana peppers are great for stuffing since they have thick walls. You can stuff them with meat, rice, beans, and many more! I insist you try Turkish Stuffed Peppers. It is the best thing I ate that contains banana pepper. Funnily, though, you can also prepare it with pepperoncini. Pepperoncini vs banana pepper, both are good options.

The stuffing is made from meat, tomatoes, parsley, onion, rice, and more flavorful ingredients. Don’t hesitate to try it. Let me know how it went! Unlike pepperoncinis, banana peppers are commonly sold at local markets and groceries. So, you can easily buy them in different forms. If you want to grow them on your own, that is good too!

It is easy to grow even in your balcony like pepperoncini’s. You can get the seeds online or from retail stores. Having your home garden is always a good option. Nothing beats the victorious feeling you get when you see them grow, and finally put them on the dinner table. Ah, that sweet success!

Banana peppers and pepperoncinis are often confused with each other. But now that you read the article, isn’t it actually easy to tell pepperoncini vs banana pepper apart now? Yeah, it is! Both are delicious, both are amazing. Usually, healthy food does not taste good, but peppers are surely an exception. If you haven’t tried them, jump on to it and tell me how you found them in the comments!